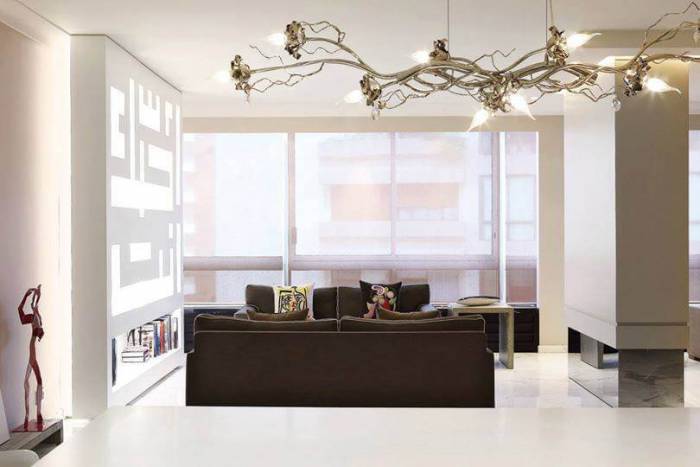 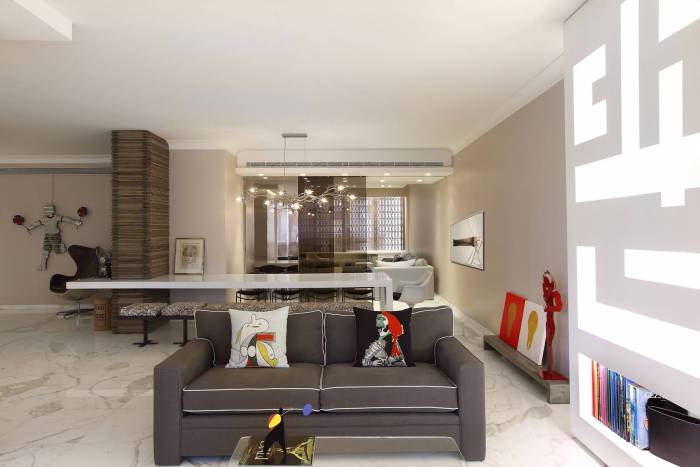 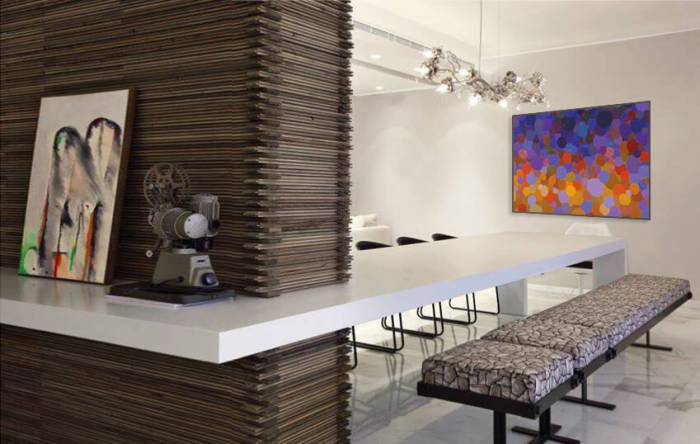 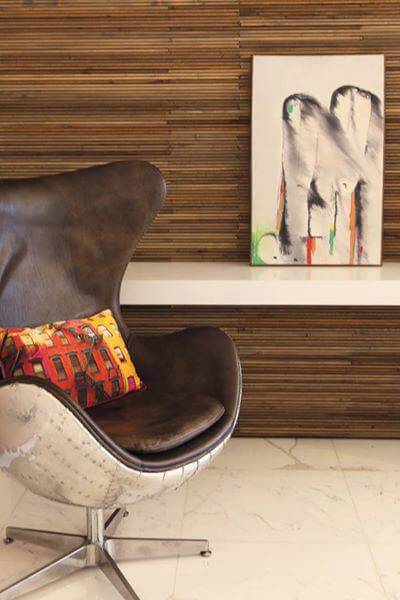 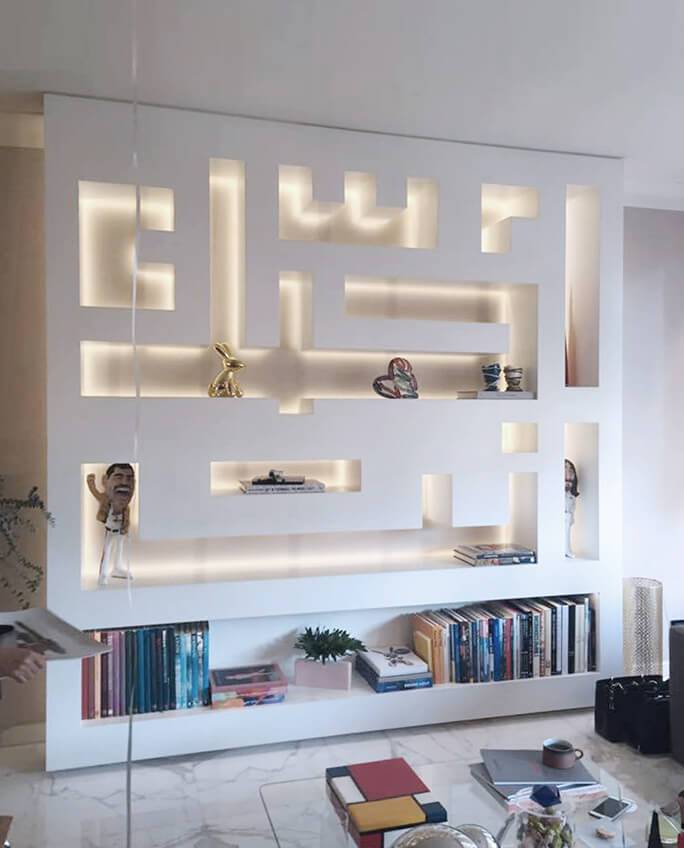 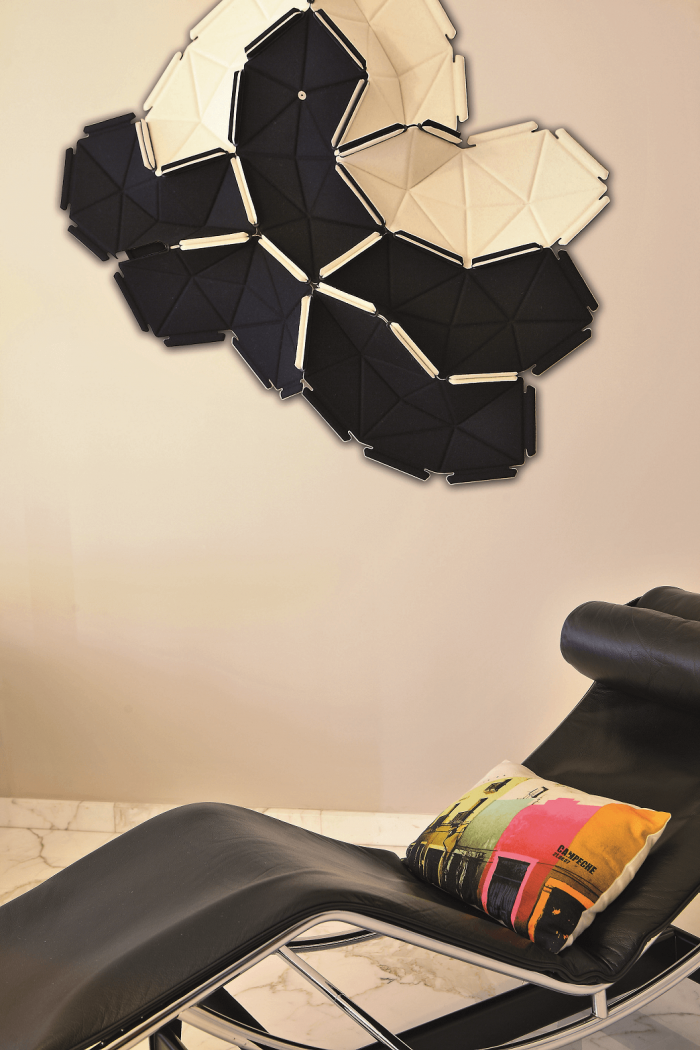 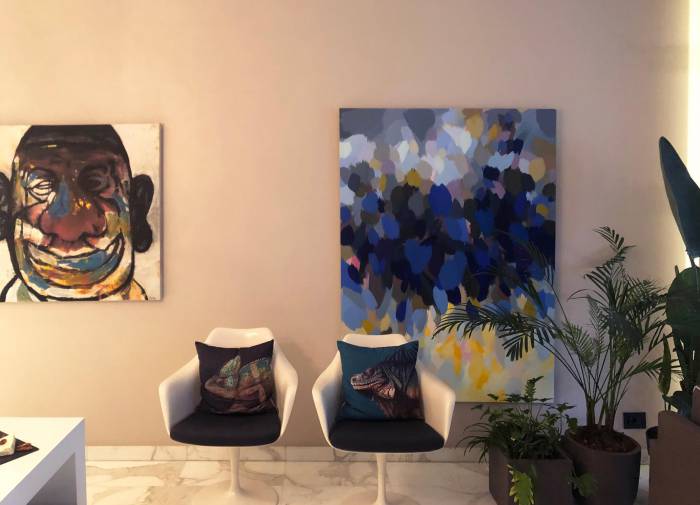 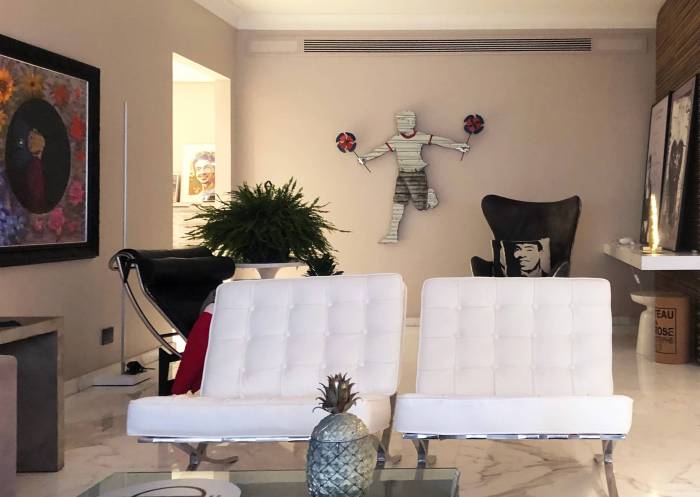 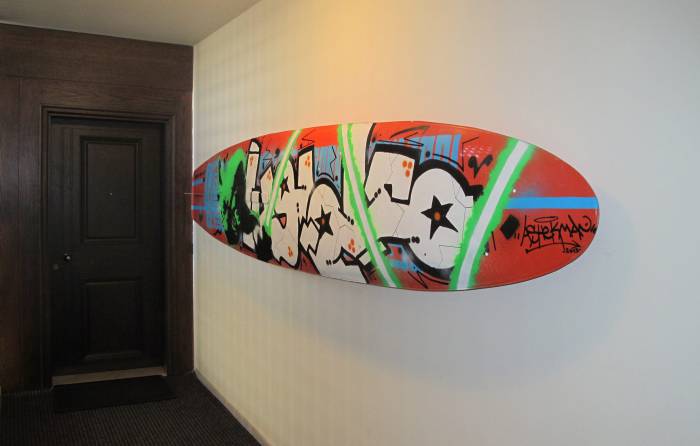 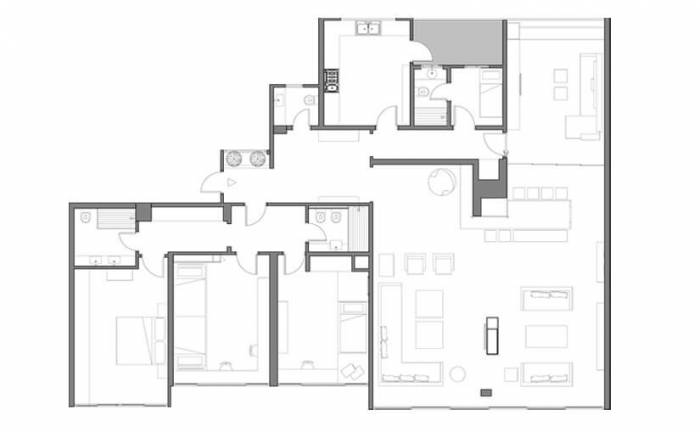 The flat covers an area of 270m2 in a landmark building built in the 1980’s. Its L shaped reception area consists of one big space and another smaller space previously the dining room area, to be replaced by an additional family room. As such locating the dining table became an essential decision and a major element around which the design developed. Placed between the reception and the new living room, a floating slab that allows a comfortable eating table for 10 seaters became a playful multipurpose surface and an integral and central element within the space. It wraps around a structural column creating an L shape visible from the main entrance, appearing as floating shelf where artwork is placed. The structural column itself was clad in rows of thin timber surpassing the corners and crossing at their edges, creating a volumetric element that conceals the column. Above the table hangs the grandiose "La Vie en Rose" a whimsical handmade chandelier by Brend Van Egmond.

A wide structural column happened to be in an unlikely location within the larger space splitting it in two. One of the challenging aspects of the project was to integrate it and transform it into a design element within the overall scheme. It was cladded in white lacquered wood slightly increasing its surface, to allow for storage and for a television screen. Another much narrower column was added allowing a slit between the two, creating a play between solid and void and an asymmetry in shapes. The two column that start to read as one unit are wrapped together by a false ceiling allowing indirect linear lighting all around, at the base a mirrored metal sheet wraps around it reflecting the white marble flooring original to the dwelling and reminiscent of sumptuous floor finishes of the early 80’s, creating a visual illusion where the TV element appears suspended.

Another important element which was conceived as the pièce de resistance in the making of the design is the immaculately white back lit wall element doubling as a book case with modernized Koufi font that translates to “You are my love”  acts as a wall sculpture, and an unusual conversation piece. On the same wall towards the dining room a beautiful colorful piece by Samia Halabi stands out to complete the design of the space. Details are also part of the stark ensemble objects and art pieces collected by the owners are placed everywhere, a vintage movie projector and an oil painting by Syrian artist Mohamad Al Jumaily at the entrance. A red sculpture Promenade avec Papa by Gulene Torrossian placed on a concrete stand near the front wall along Bubble Figure Series by Prawech Pranaprom. Other fun details include John Lennon and Freddy Mercury papiers mâchés figurines on a vintage knoll white table. Eclectic urban and portrait cushions adorn the custom made sofas as well as the vintage chairs.  The simple but impactful gestures and the careful selection of materials created a spontaneous and personalized space free from ornament, a highly conceptual non-decorative space.