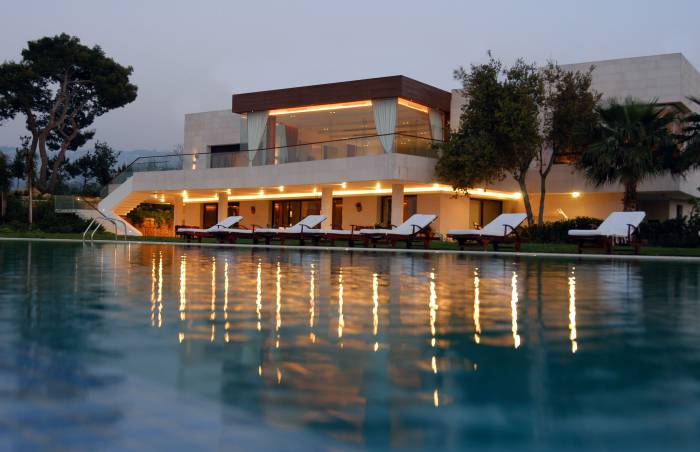 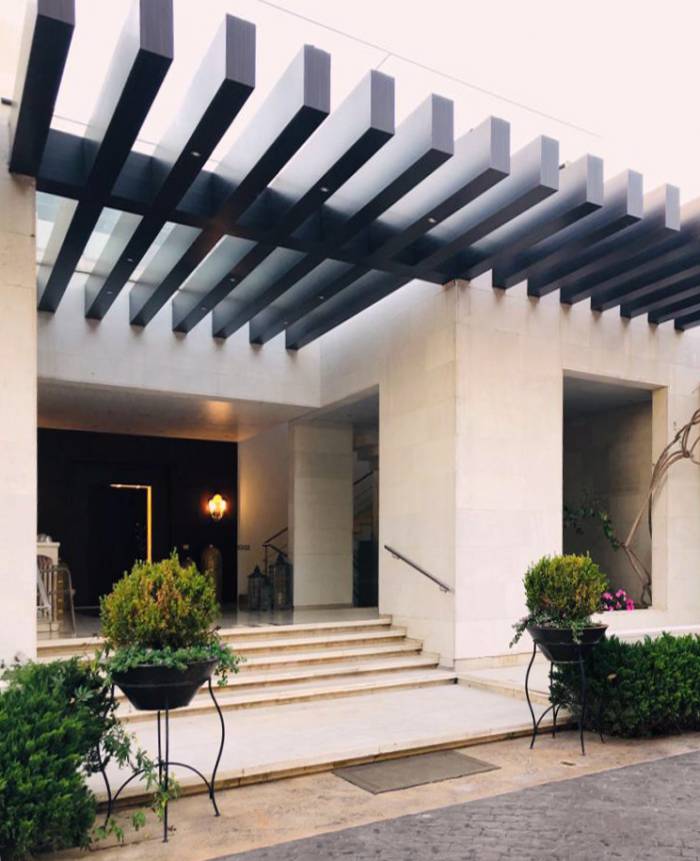 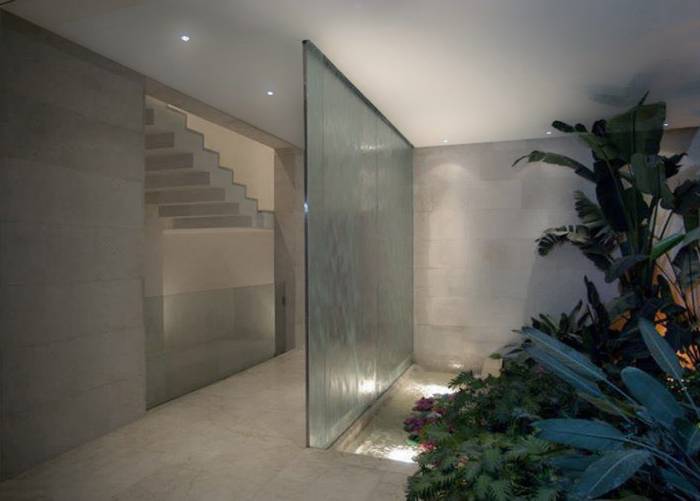 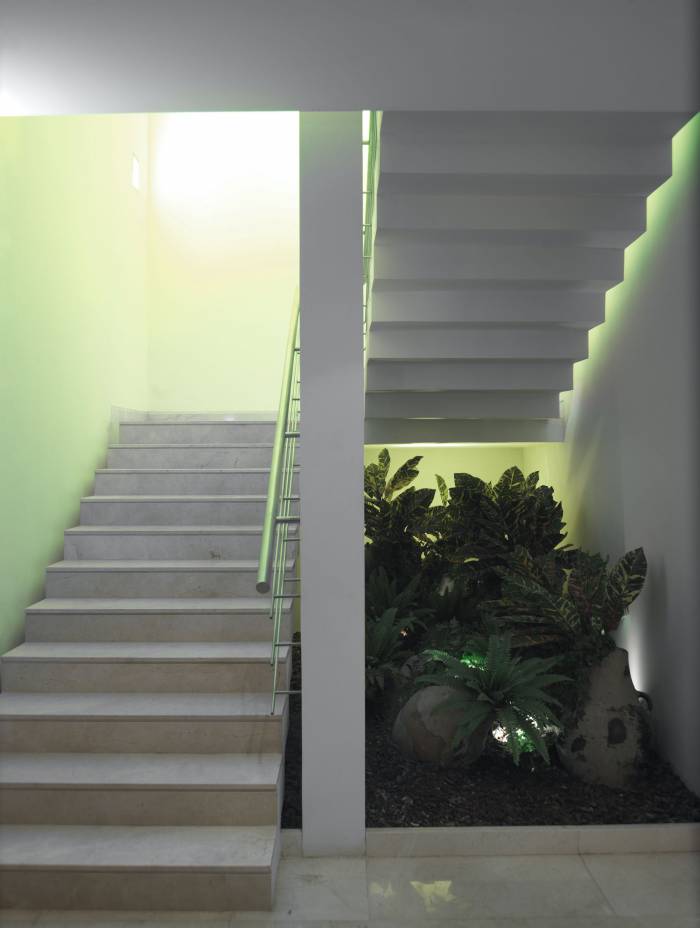 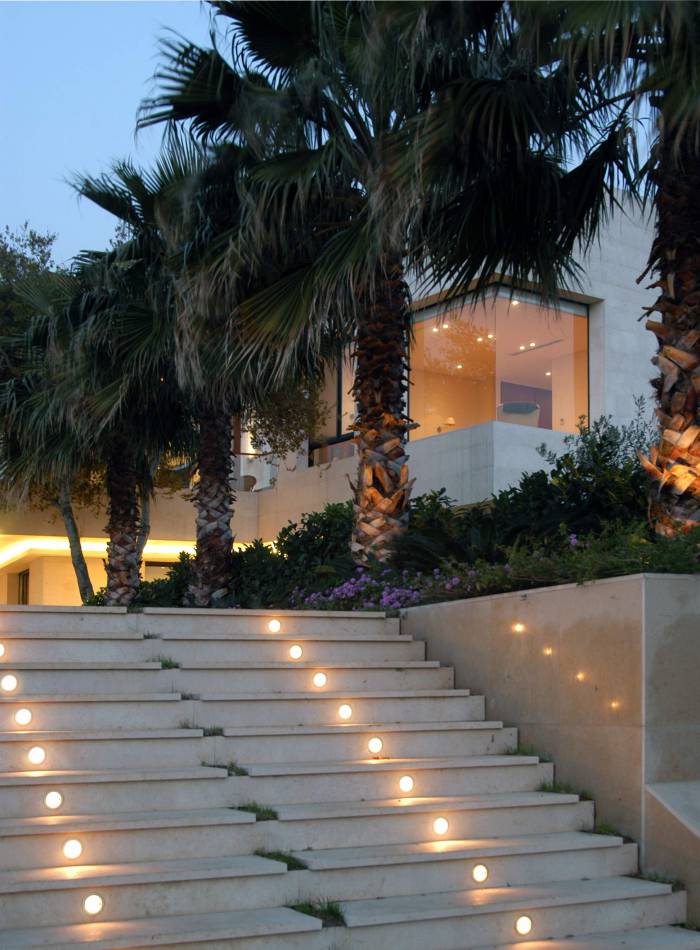 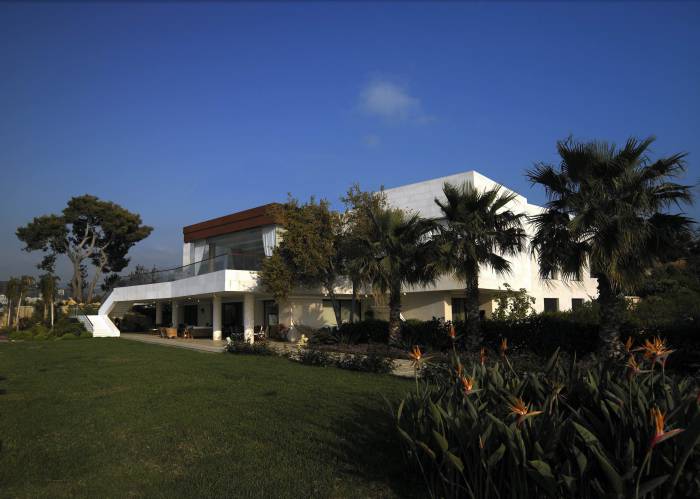 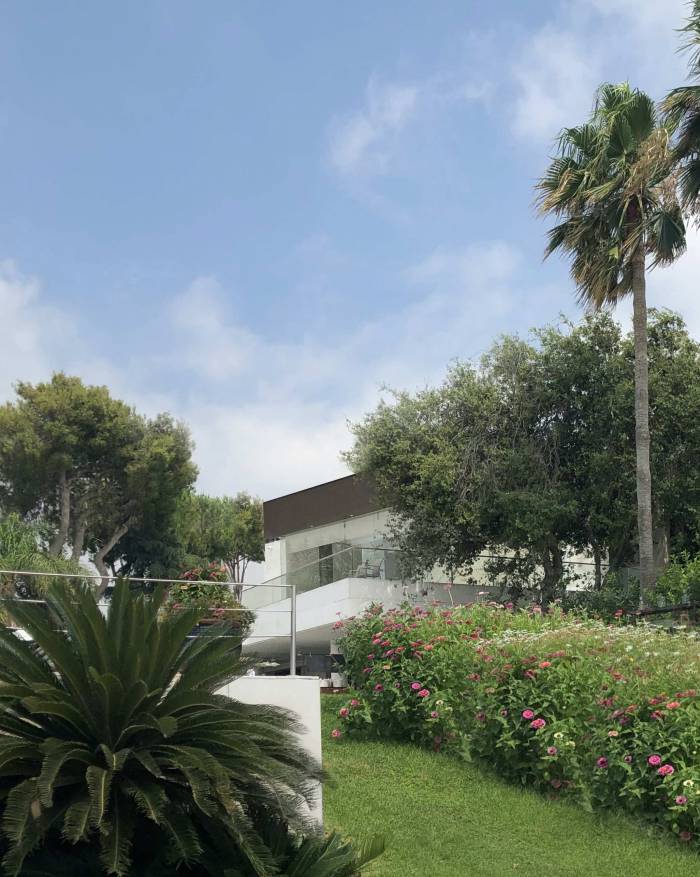 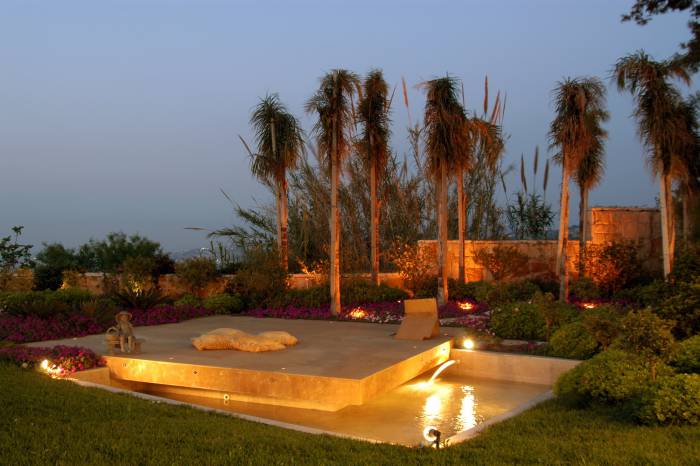 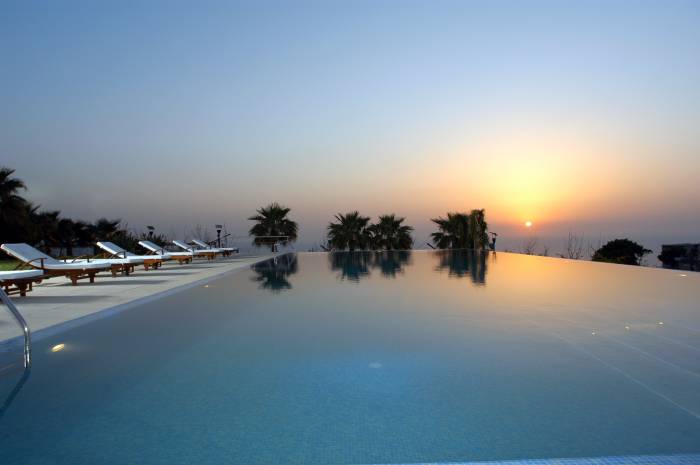 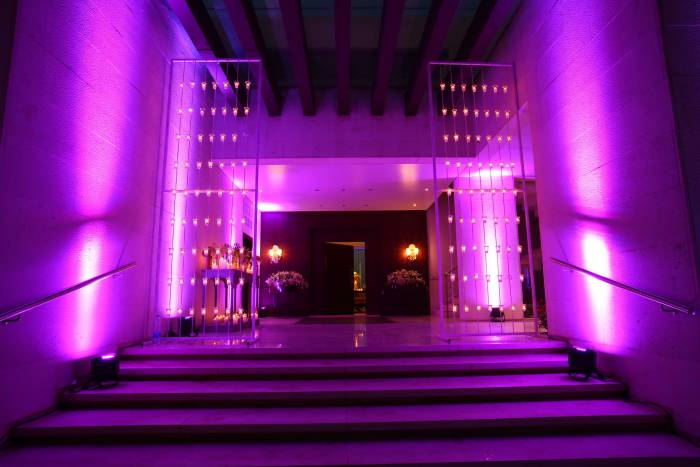 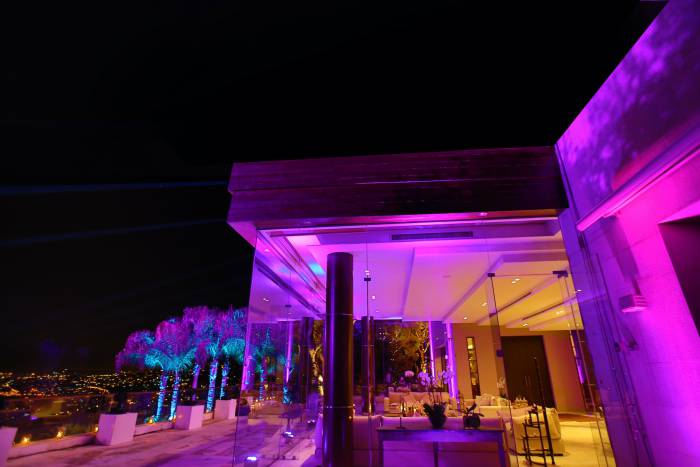 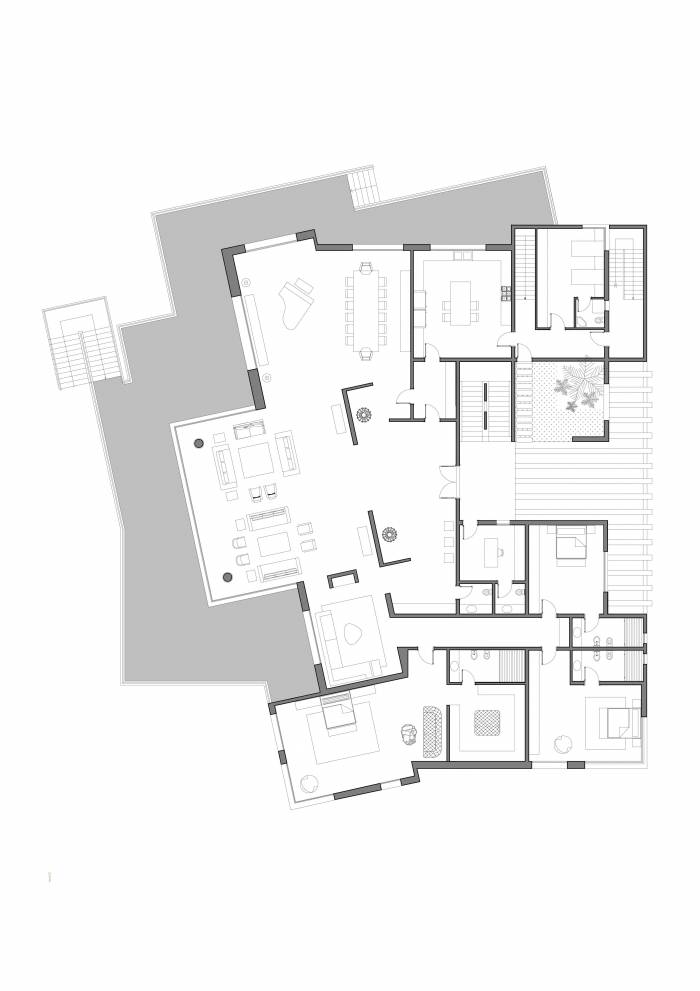 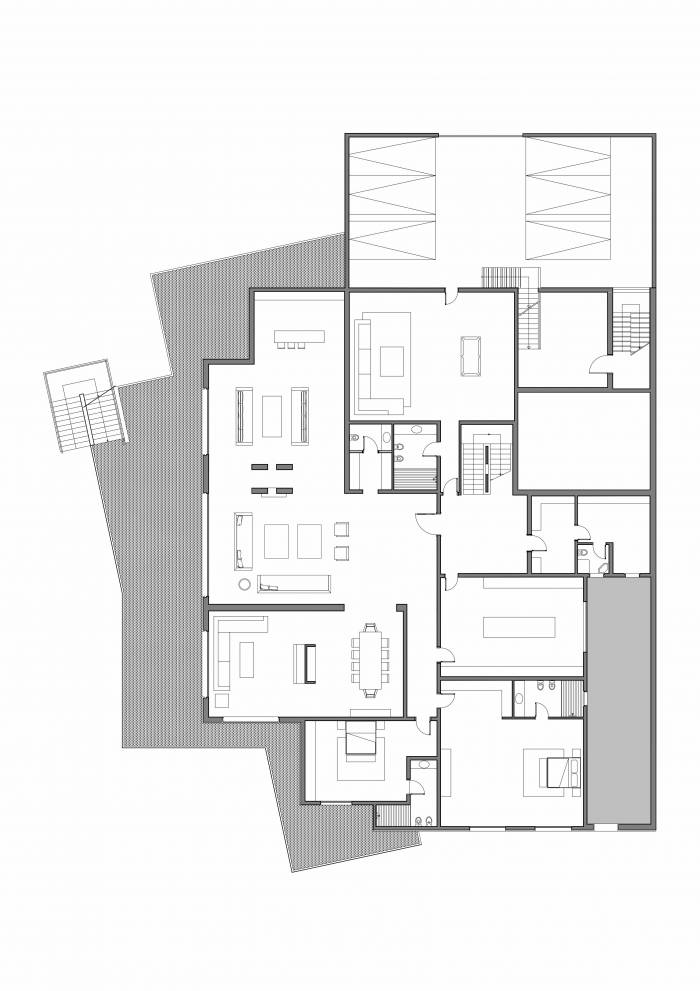 Opening up a subterranean existing space was central to the design approach for the 1,400 m2 Deirkoubel Villa on a 2,000 m2 plot overlooking terraced fruit orchards and low lying sloping reliefs spotted with olive tree groves and at a horizon the Mediterranean. Unearthing the turn of the last century's modest living space extended an immediate dialogue with the exterior and inspired a balanced and harmonious evolution of spaces and dimensions on the western and eastern sides of the central core space. The grade level space, opened to the exterior garden under a covered terrace, was then reinforced to support the top level floor to become an integral part of the villa as volume rises to grade on the eastern façade bridging the height difference of the sloping plot.

The villa is designed around two axis stretching over the back and side facades and creating a fluid mobility where volumes interlock, rotate and cantilever. It is a design feature that produced a relationship of independence and privacy for intimate quarters and better control over the choice of views within the spaces. Through a strategic decision of the place, size and treatment of the glazed openings, the back façade achieves a light and fluid aspect. Its terrace hovers above the garden creating a horizontal plane that slices the structure rendering the lower floor (base of the structure) less visible and the upper floor even lighter.

In stark contrast to the open airy north western exposure, the main entrance reveals itself after a climb through a narrow tree lined road, as a single storey elevation enhancing the horizontality of the design.  Through a masterful manipulation of lights and shadows, the front façade clad with locally quarried white limestone illuminate shapes and enrich depth delicately tempering the villa’s front entrance and maintaining the ethereal connection with its context as it disappears into the landscape.

Through the unassuming front door the focus spills into a majestic 100 m2 (10X10m) glazed reception area with dramatic high ceiling opening up to spectacular views of the sea, the sky and the city of Beirut. An illuminated waterfall glass screen located at the easternmost side delineates the service area to the left. Its translucent material gives glimpses onto the interior floating staircase wrapping around a vertical wall with linear voids along the edges that invite natural daylight to wash over the walls and lower level.  The rapid transformation in scale and dimension creates new sensations as you penetrate the space blurring the lines between indoor and outdoor as the glazed living virtual box no longer frames views but rather embraces nature. It extends into a vast cantilevered terrace leading into the garden via an outdoor staircase suspended between the upper and lower levels. To the right of reception area is the service area. It includes a kitchen with its small terrace extending over the car park for morning breakfast, and to the left the private zone, comprising bedrooms and office space. Each room capture a framed scene of the nature that surrounds it, as rigid corners disappear by use of  transparent glass windows lightening up the mass best illustrated by the cantilevered volume of the master bedroom  giving selected views of the garden and pool.

The lower level is a fully equipped to function independently from the upper level. Spaces are articulated around the main living quarters. Taking full advantage of the surrounding exterior, it is conceived to procure each zone with its own private garden: the bedrooms on the west side have access to the terraced fruit garden, the kitchen its own private outdoor space, and the bar area overlooks a rock garden where a retaining wall was built to preserve an old pine tree existing on the site. The living space, by means of the covered terrace, extends into the main garden area, where the infinity pool pays a final homage to the stunning location. Boosting a raised 3X3 square platform to its left side corner for a feet-in-water luncheons on hot summer days while its western limitless edge flows into adjoining landscaped terraced nook for evening entertaining and el fresco dinners.